The Federal Reserve Is Directly Monetizing US Debt

by
Peak Prosperity
My articles My books
Follow on:
Summary:
The Federal Reserve is now directly monetizing US federal debt. Sure, it’s not admitting to this. And it’s using several technical jinks and jives to offer a pretense that things are otherwise. But it’s not terribly difficult to predict what’s going to happen next: the Federal Reserve will drop the secrecy and start buying US debt openly. At a time, mind you, when US fiscal deficits are exploding and foreign buyers are heading for the exits. How It’s Supposed to Work Here’s how it’s supposed to work when the US government issues new debt: If the US Treasury needs to raise new funds, it announces an upcoming auction of US Treasury bills/notes/bonds. A date for the auction is set. Various participants bid for those bills/notes/bonds (including ‘regular folks’ like you and me if we’re using

The Federal Reserve is now directly monetizing US federal debt.

Sure, it’s not admitting to this. And it’s using several technical jinks and jives to offer a pretense that things are otherwise.

But it’s not terribly difficult to predict what’s going to happen next: the Federal Reserve will drop the secrecy and start buying US debt openly.

At a time, mind you, when US fiscal deficits are exploding and foreign buyers are heading for the exits.

How It’s Supposed to Work

Here’s how it’s supposed to work when the US government issues new debt: 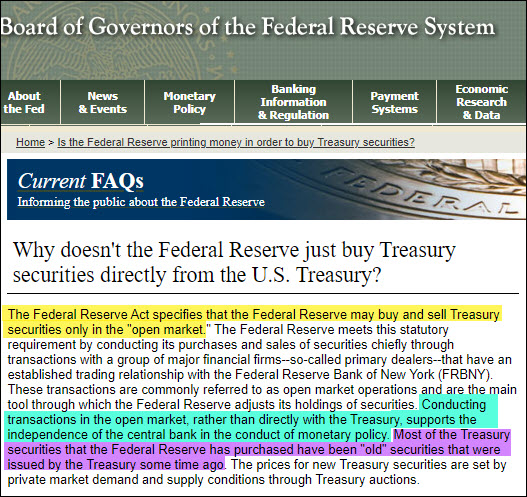 There are two important claims plus one assertion I’ve highlighted in there, each in a different color:

So according to the Fed: it’s independent, it follows the rules set forth in the Federal Reserve Act of 1913, and it mostly buys “old” Treasury paper that the market has already properly priced in a free and fair system.

But that’s not really what’s going on…

It’s now clear that something spooked the Fed badly in September.

We still don’t know what exactly went on, but the Repo market blew up. While this was a clear sign that something big was amiss, the Fed has not yet explained what the cause was, who needed to be bailed out, or why.

And it’s not going to anytime soon. It recently announced that its records on the matter are going to be sealed for at least two years.

While the Fed is ostensibly a public institution, and yes transparency should be extremely important — at least to maintain the appearance that it’s being careful with public monies — the Fed is prioritizing secrecy here.

Whatever’s going on has been serious enough for the Fed to openly lie. And not just in regards to the repo market.

“It’s not QE!” Fed chair Jerome Powell recently declared upon relaunching an asset purchase program that has already expanded the Fed’s balance sheet by hundreds of billion of dollars.

Given all the secrecy, obfuscation and lies, the Fed is now in clear violation of the spirit of the Federal Reserve Act of 1913.

Recall from above that the Fed “only buys Treasury securities in the open market”, meaning from other banks and financial institutions.  That’s how the Federal Reserve Act of 1913 is written: 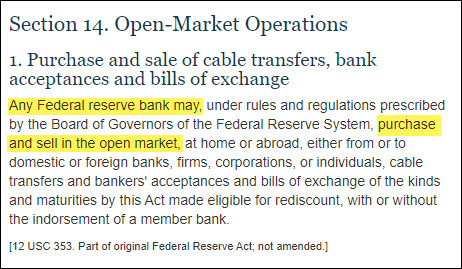 Let’s walk through an example that connects the dots here.

Just know that this is but a single example out of many.

Each and every Treasury offering comes with an identifying number called a “CUSIP” number (referring to the Committee on Uniform Securities Identification Procedures).

November 5th, 2019 those T-bills were “issued”, meaning that was the actual date that they were to become active.  Before that date, nobody had possession of them and nobody was earning interest on them: 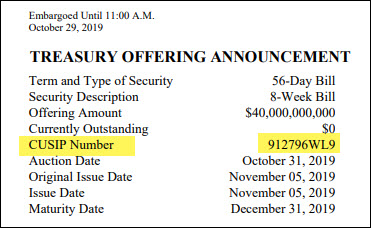 From the Treasury Offering Announcement above, on November 5, 2019, $40 billion of CUSIP number 912796WL9 were issued to the market.

It’s worth pointing out that no money changes hands on auction day (Oct 31 in this instance). It only does when the bills are issued (Nov 5 in this case).

Looking at the Federal Reserve’s website, we can see what they bought and when (but not for how much).

There we find that very same T-bill with the CUSIP 912796WL9 showing up as having been purchased by the Fed Nov 5, 2019 — the very date of its issuance: 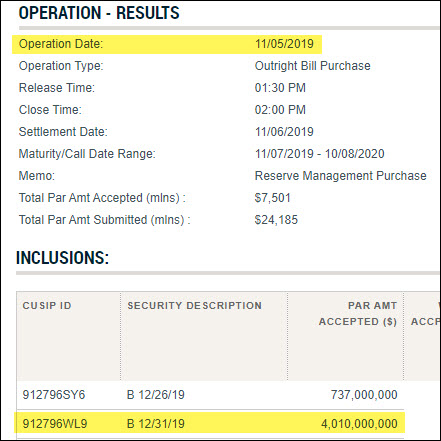 The Fed bought more than $4 billion of this CUSIP.  If these T-bills were out in the “open market” they weren’t there for long. At most, less than a day before the Fed scooped them up.

Does it really matter if a big bank sits ever-so-briefly between the Fed and the Treasury debt it buys?

Maybe to a trial lawyer seeking to get a guilty client off on a technicality. But this certainly doesn’t qualify as “old” paper.

This is the Fed buying huge amounts of very freshly minted – not even a day old! – government paper using the power of its electronic printing press.

What the practical difference between the Fed buying this directly from the US government and buying it same day it issues from a big bank?

Virtually nothing — except the big bank probably took home a very hefty paycheck for conducting this “service” as a middleman.  Later JP Morgan, et al., can report magnificent “profits” from their ”trading activities”, which amounted to little more than calling the Fed the week before and asking how many $billions of these Treasury bills they wanted.

Just a temporary middleman who, if only skimming a single basis point (1/100 of a percent), would have gotten $400,000 in “trading profits”  for holding onto a big pile of government paper for less than a single day, with a guaranteed buyer with infinitely deep pockets already lined up.  Great work if you can get it, eh?

But not very fair. Nor even remotely in line with the spirit of the Federal Reserve Act. Or what capital markets are supposed to be about. Or the Fed’s actual mandate.

The summary here is this: the Fed is buying US government paper on the day it’s issued.

The Fed is directly monetizing US debt.

The debate over whether or not MMT (“Modern Monetary Theory” see here for background and discussion) should or should not happen is now moot.

Over the past year, the US government has spent ~ $1.3 trillion more than it took in.  To cover the shortfall, it had to raid the Social Security piggy bank for (another) $276 billion and tap the “markets” for another $1.1 trillion.

If not MMT, what other name should we give a program where the US government spends $1.3 trillion more than it takes in and the Federal Reserve covers the shortfall by by purchasing US government debt on the day of issuance?

Does it matter if the US government issues it out of thin air, or if the Fed creates the same cash money out of thin air?  Does it really matter in the slightest what the precise mechanisms is if the results are identical?

I would argue they don’t matter in the slightest.

All that remains now is to argue over what to spend all that fresh cash on.

Sure, some might like to debate whether we should be doing this or not. But the reality is: there’s little point in arguing over whether something should happen if it’s already happening.

Now all that’s left to debate is how much larger or smaller the Fed’s government debt monetization efforts might be.

Further, we might debate exactly what the government is spending all that money on.  Or what the repercussions will be of the dangerous monetary road we’re now careening down.

But I’m not aware of any particular representative of mine even being aware of the situation, let alone concerned.

This is a very serious and extremely important conversation to have. But it’s not being had at all.

During Jay Powell’s last news conference, the Chairman of the Federal Reserve (and defender and champion of the largest wealth transfer to the rich in world history) was not asked a single question on this topic.

Nobody asked anything about the extreme and accelerating wealth and income gaps, both direct outcomes of the Fed’s policies.

Nobody expressed concern about the Fed’s secretive actions, its direct debt monetization, or its violation of the Federal Reserve Act.

The US media is toothless. I assume today’s journalists are simply too afraid of losing their jobs to speak truth to power, and have slipped into quiet acceptance of a mere stenographer’s role.

“Yes, Mr. Powell, you’ve reversed course and have started lowering interest rates again, and have resumed growing the Fed’s balance sheet via new QE. Oh yes, you’re right, it’s ‘not QE’. How silly of me. But despite those emergency measures, the economy is ‘in a good place’ and we all should be super optimistic? Got it. Yes, sir — very inspiring. Anything else?”

You’d think, given the enormous troubles that tend to follow central bank debt monetization that there’d be some curiosity on the topic, but no.  No pushback from the media or Congress, direct or tangential.

Meanwhile the Fed has tossed a mind-boggling $285 billion of permanent new money into the “markets” over the past couple of months, and is conducting daily operations that put additional tens of billions of dollars of short-term money into the markets as well.

All while claiming everything is fine.

Sure doesn’t feel that way, does it?

In Part 2: Why The Risk Of A Correction Is So High Right Now, we demonstrate why the faith today’s investors are placing in the Fed’s ability to push prices ever-higher is dangerously overextended.

Stock gains have already zoomed way ahead of the Fed’s recent excess liquidity measures, and it will not take much to topple them.

The post The Federal Reserve Is Directly Monetizing US Debt appeared first on Peak Prosperity.

My articlesMy books
Follow on:
Previous The West Was Never Really an Enemy of Soviet Communism
Next Why The Risk Of A Correction Is So High Right Now

‘I Have Freedom Of Speech’: Trump Hits Back After Critics Claim Witness Intimidation, ‘Thugocracy’